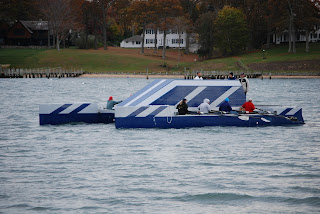 Recap: Introduction to Roc Expedition Rowing Project, Big Blue
Dec 12, 2010  By Angela
Just to bring everyone up to speed on what Angela Madsen is up to these days
I do have another rowing project. It is not my solo row that I had begun planning and am chomping at the bit to do. It is something different and interesting. I took a visually impaired rower from Canada ocean rowing. He was considering rowing across the Atlantic. He found me on the internet. He is no longer with the project as he became violently ill on the boat, Sea Sickness combined with some shoulder problems changed his mind about ocean rowing but hey that is why I do the introductory ocean rowing classes. It should be everyone’s first step when considering rowing an ocean. The project that he was part of had lost their skipper so Franck told them about me. I began receiving e-mails from this guy Steve
Steve is relentless and convincing when he wants something, He does not give up! My kind of people! I began finding out more about their project, the crew, the boat and David. I discussed it with Debs, looked at what horrible financial shape I am in from all of this ocean rowing without sponsors, Gave much thought to my solo ocean rowing project and decided what the Hell, I can do both. First thing was to jump right in and organize sea trials for the project. To make sure it happened as this crew had been let down and abandoned before. They were not prepared, much of the critical information they needed to ensure success of their project was missing. I signed on late in the game with some big challenges and I have been cramming them with information, so much they could now be successful without me. They know what they are doing and why, from preparation of the boat to survival training, they have an extreme sense of caring for crew, camaraderie and of loyalty. They are amazing! We are still looking to fill the 16th spot on the crew.
Debs and I leave for Morocco on Christmas day.
I will blog more on my solo rowing project another time, I have not postponed it, changed or deviated from my plan, and it got a little more complicated and difficult. It became more interesting!
Angela
Posted by debmole at 8:31 PM No comments: