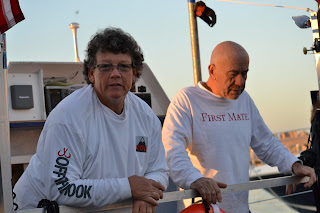 2011 02 18  Messages, Barnacles, Silence, Fish, Rotting Flesh &-1000 by Angela
Via 3 Sat Phone Conversations w/Deb
Angela says that the crew enjoys getting their messages.  They have a new practice on the Big Blue…instead of Dinner and a Movie they get a Meal and Messages.  One watch is on at 2pm and the other at 4pm.  They sit around, eat, and share messages.  So keep posting the 160 character messages to the guestbook at www.BigBlueRow.com.   There is a little delay as I send the shortened messages to the Sat Phone and then approve them so they show up on the guest book.
A few days ago, they decided they ought to check the bottom of the boat for Barnacles.  It doesn’t sound like a big thing, but it does seriously slow down the boat.  Usually a couple of times while crossing the Atlantic, it is necessary to jump in the water and physically scrape off the bottom of  the boat.  In RowofLife, Angela taped her camera to an oar so she could look at the bottom and surrounding area for sharks.  RowofLife’s anti-fouling paint was from France, where I don’t think there are as many environmental restrictions.   Very few barnacles successfully attached to the bottom of RowofLife.  Big Blue is from the US and its paint fouled far fewer barnacles.  Angela said she could feel the difference in how the boat moved through the water after they barnacle scrapping.
Running out of ways to find their Zen….several of the boys committed to 24 hours of silence.  Angela thought it sounded like a fun plan, until without their silent partners to speak with, the talking rowers found that it was their turn to complain.  Angela said she received more complaints in that 24-hour period than at any other time on the trip.  Angela was happy when the silence was over for the boys.
I was talking to Angela on the sat phone when all of the sudden, all I could hear was Angela, screaming like a GIRL!  Then the phone hung up.  An hour or so later I got the call back with the explanation.  Angela was sitting on her bunk, all ready to go to bed, when she called me.  Her bunk is just next to the cabin door.  When I “Giant” flying fish flew through the cabin door and landed on Angela’s bed.  She was so sad that her clean bed now was slimy and smelled like fish.
Another flying fish note….There was a terrible smell on the boat.  For several days, Angela was trying to figure out where it was coming from and what it was.  More and more determined to get the smell to go away, she started tearing apart things looking for the smell.  A flying fish lodged itself under the life raft tied to the front of the boat.  Now that the fish is gone, they are back to the familiar, dirty, rotting flesh smell.
Speaking of rotting flesh, Aleksa spoke to me on the phone and described her body as a Dermatological disaster.  She says she has amazing sores all over her body.  I packed the big bottle of Antibiotic powder.
Big Blue has less than 1000 miles to go.  They should be in Port St. Charles, Barbados March 1, 2011 (maybe the 2nd).  Friends and families are making their plans to greet the crew in Barbados.   There is a webcam at the Marina, so if you are not able to make it to Barbados, you can watch the arrival on the webcam.  http://portstcharles.com/webcam_window.php?cam=3
Posted by debmole at 8:06 PM 1 comment: 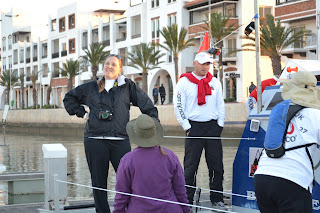 2011 02 17-- Aleksa Mini Blog
via Brother Tomas on Facebook
Brother Report: Aleksa would like everyone to know she successfully celebrated Vasario 16ta in the middle of Atlantic!  She and the rest of the crew are also now limited to one meal a day to make their food last until they get home.  Estimated date of arrival in Barbados: March 1st, 2011.  She appreciates everyone’s thoughts are her!
Posted by debmole at 6:41 PM No comments: 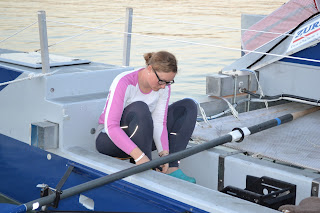 Posted by debmole at 6:21 PM No comments: 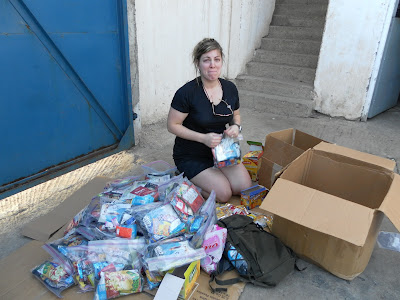 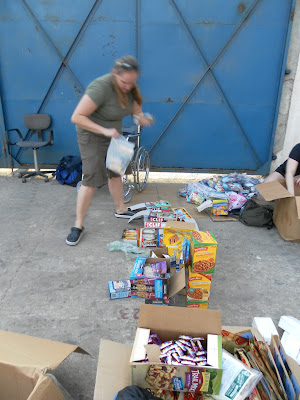 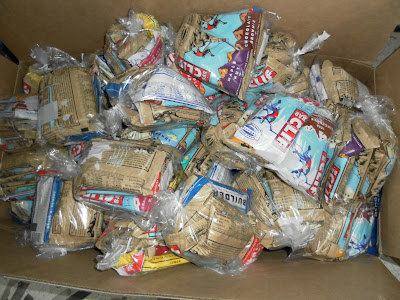 2011 02 15  Food Inventory by Angela
Via Sat Phone to Deb
Angela inventoried the food on board Big Blue.  They have about 2 weeks left to go.  She says they have plenty of breakfast for the remainder of the trip, 225 main meals, about 50 packets of chicken, tuna and salmon, and 93 deserts.  Everyone has snack packs ranging from 13 to 21 per person left.  She assures me they have plenty of food.  They are eating a breakfast, a main meal and a snack pack a day until the end of the trip.
Families are working on travel arrangements to Barbados.  Excitement is in the air as the journey’s end is in sight!
Posted by debmole at 12:51 PM No comments: 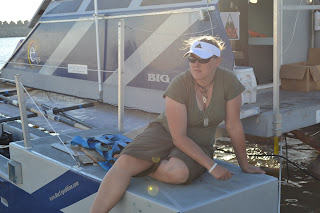 2011 02 13 Aleksa Mini Blog
Via Brother on Facebook
Brother Report: Aleksa says they must be rowing towards the Bering Sea because of how cold it is. Also, they discovered a mystery poop in the middle of the cabin. Furthermore, it seems Ryan has snapped and is walking around in a loincloth, and the crew calls him 'Baloo'. Deb, I think the mystery poop part can be excluded from the blog.
Debra Bogan Moeller That's the best part! Especially since the toilet is no where close to the cabin. Interesting....
Posted by debmole at 11:27 PM No comments: 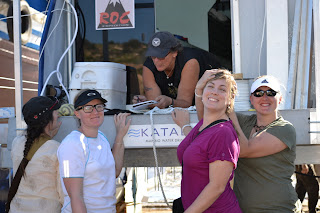 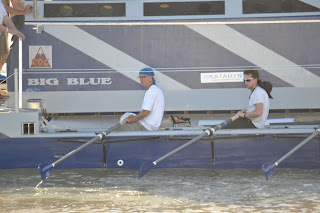 2011 02 13 Sylvain Mini Blog
Via Suzanne on Facebook
telephone call from Sylvain 2 days ago (thanks Angela aka MacGyver for creating an external charger for the sat phone!)...some rowers dealing with injuries (to be expected after such arduous conditions and SO much rowing), waves still gigantic, flooding the hatches and waterlogging some of the...
Posted by debmole at 7:12 PM 2 comments: 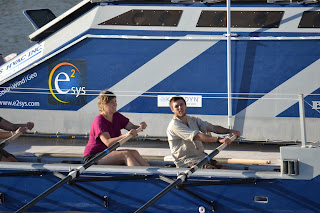 Angela told me the waves are amazing.  The waves are 5-6 meters (~15-18 feet).  They are surfing the waves with the boat and not rowing. They are getting boat speeds of 13-15 knots. They had the first wave go over the top of the boat.

Nigel is the current leader of the "person on the potty when the boat speed was the greatest". She said the boat was going 17 while he was on the potty. Take that man to a mechanical bull contest with a big purse.

All for now! Deb
Sent from my iPhone
Posted by debmole at 11:24 AM No comments: